In the Tezos community, we often see many similar questions from newcomers, such as “Are my XTZ locked after delegation” or “I recently delegated and haven’t received any staking rewards so far”. This is actually a good sign as it demonstrates the growing of Tezos community and the whole ecosystem, and we want to make our contribution by creating a kind of documentation which could explain such questions for noobs who don’t have technical skills and don’t want to dig into the Tezos protocol specification.

In this article we will try to answer the most common questions such as “When will I receive Tezos staking rewards” and briefly explain the essence of the Tezos delegation process. No complicated details - just the facts. If you need technical details, take a look at Tezos documentation.

First of all, let’s discuss general questions regarding Tezos staking.

What is Tezos staking (baking)?

Staking (in Tezos we call it “baking”) is a generalized concept of participation in the process of forming blocks in any blockchain, based on the Proof-of-Stake consensus algorithm. Everyone who holds some amount of Tezos coins has the right to produce, sign and validate blocks and get rewards in proportion to their stake.

The only thing you need to exercise your baking rights is to run a node with baking software and keep it online and up to date.

What is Tezos delegation?

Delegation is when you delegate your staking/baking rights to another person (we call it “baker”), rather than setting your own Tezos node. It’s a quite useful feature as it allows you to participate in staking and receive Tezos staking rewards without the necessity of maintaining a node.

Delegation in Tezos is absolutely safe! Your funds are not locked or frozen and do not move anywhere. You can spend them at any time and without any delay. Just keep in mind, you only delegate your rights, that’s it.

Which is better - self-baking or delegation?

In short, delegation is much better for an average user. Yes, Tezos bakers get slightly more staking rewards, because they don’t pay the fee (but charge fee), but also, they pay for hosting, they spend time maintaining a node and moreover they have a risk of losing money on double baking (e.g. if the node was configured incorrectly). Thus, for an average user delegation is the most preferred and safe way to participate in Tezos staking.

How to delegate XTZ?

It’s quite simple to delegate purchased Tezos coins (XTZ) because almost all existing wallets supported Tezos have already implemented a convenient interface for delegating. There is no need to explain each Tezos wallet separately because the main steps are the same, e.g. how to delegate with Atomex:

That’s it. The only thing you should worry about is choosing a good and reliable Tezos baker or delegation service. See the guide on how to choose Tezos baker or watch the video.

After you click “Delegate”, the corresponding operation is sent to the blockchain and your delegation status becomes “Pending”. You can check that everything went well in Tezos explorer. 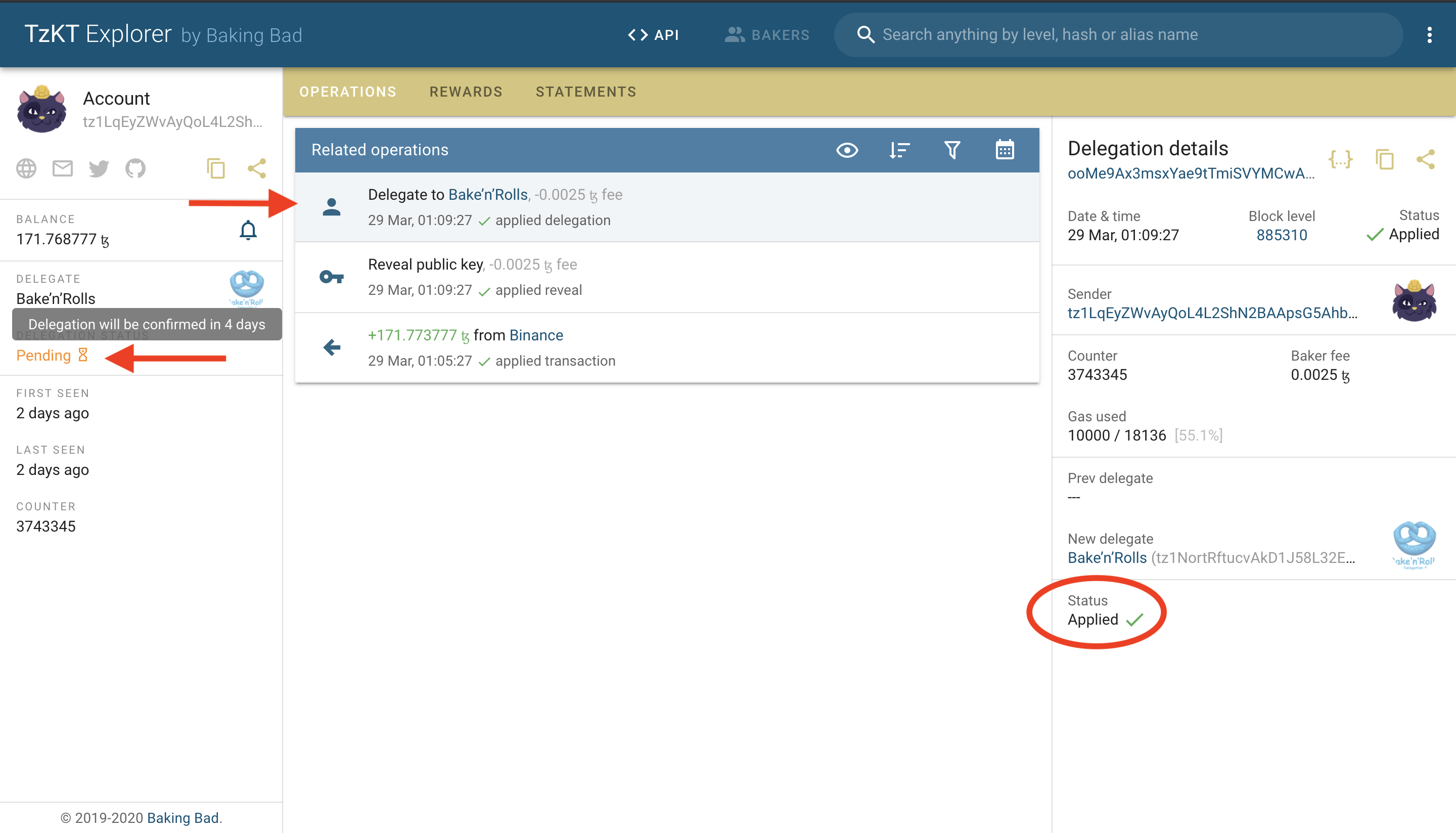 As you can see, your delegation is not applied immediately right after delegating. You need to wait a while before it’s confirmed. We introduced three stages of delegation:

You’ve successfully delegated, but your rights are not transferred to the baker yet. This delay is required to prevent the network from some forms of abusing. See more details in the Tezos documentation.

Your delegation is confirmed and the baker received future baking rights (to produce and endorse future blocks). So, now you know that you will definitely participate in Tezos staking in the near future and therefore you can estimate future staking rewards. 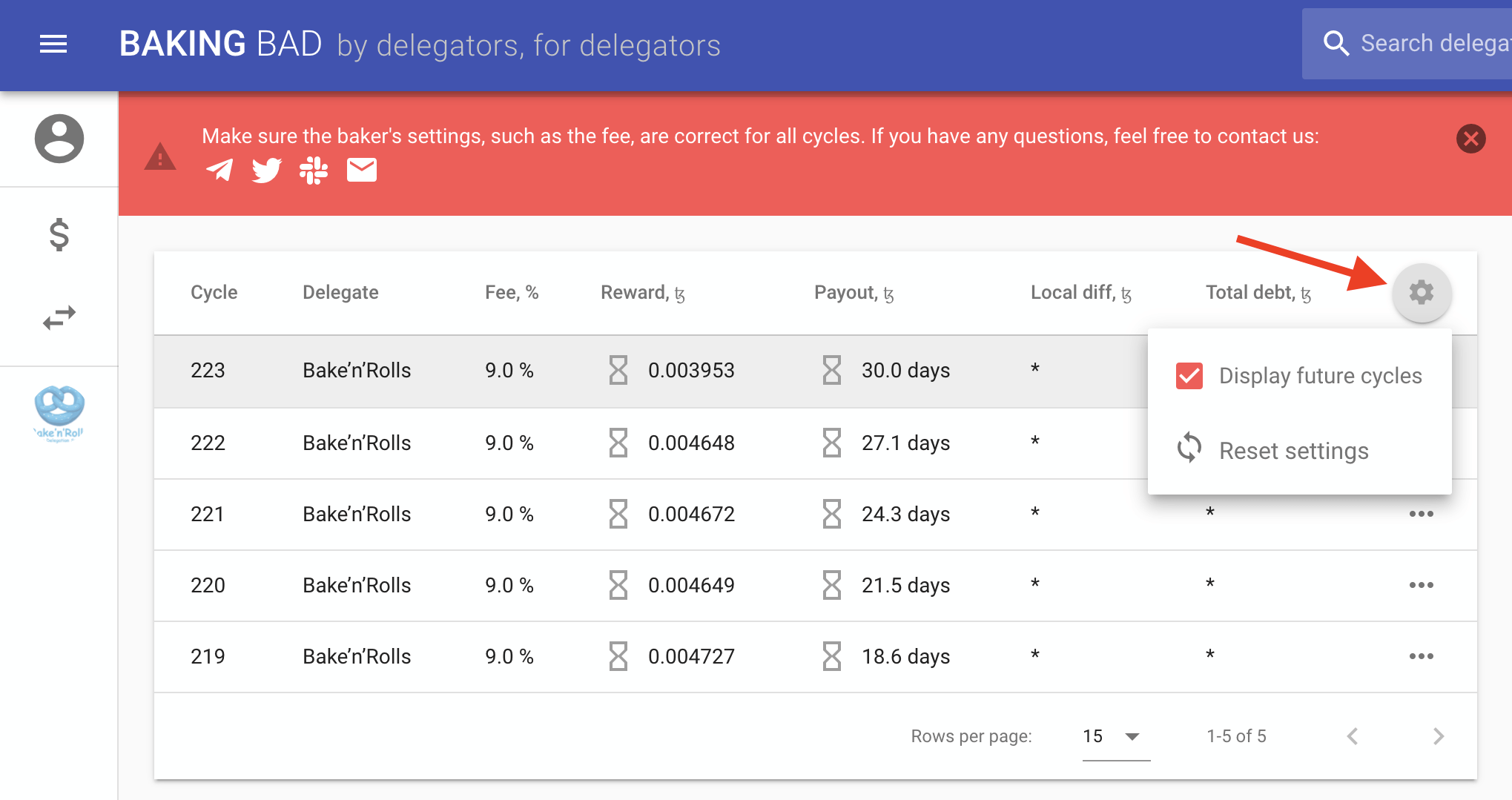 Now you are completely in Tezos staking and earning rewards.

As you can see, you have to wait ~20 days after delegating before start staking. Nevertheless, it doesn’t mean that you will start receiving reward payments at the same time as your delegation status becomes “Active”.

As we said before all Tezos staking rewards are credited to the baker and not to delegators directly. Moreover, every time baker receives rewards, those rewards are frozen for the next 5 cycles (~14 days), so the baker can’t spend it. Only after ~14 days rewards are unfrozen and the baker can transfer it to someone else.

Most bakers wait until rewards are unfrozen and only then pay it out to delegators, so there is a lag (payout delay) between earning staking rewards and receiving payouts. That’s why you can see that Tezos staking rewards for cycle N usually comes in cycle N + 6 (after ~17 days): 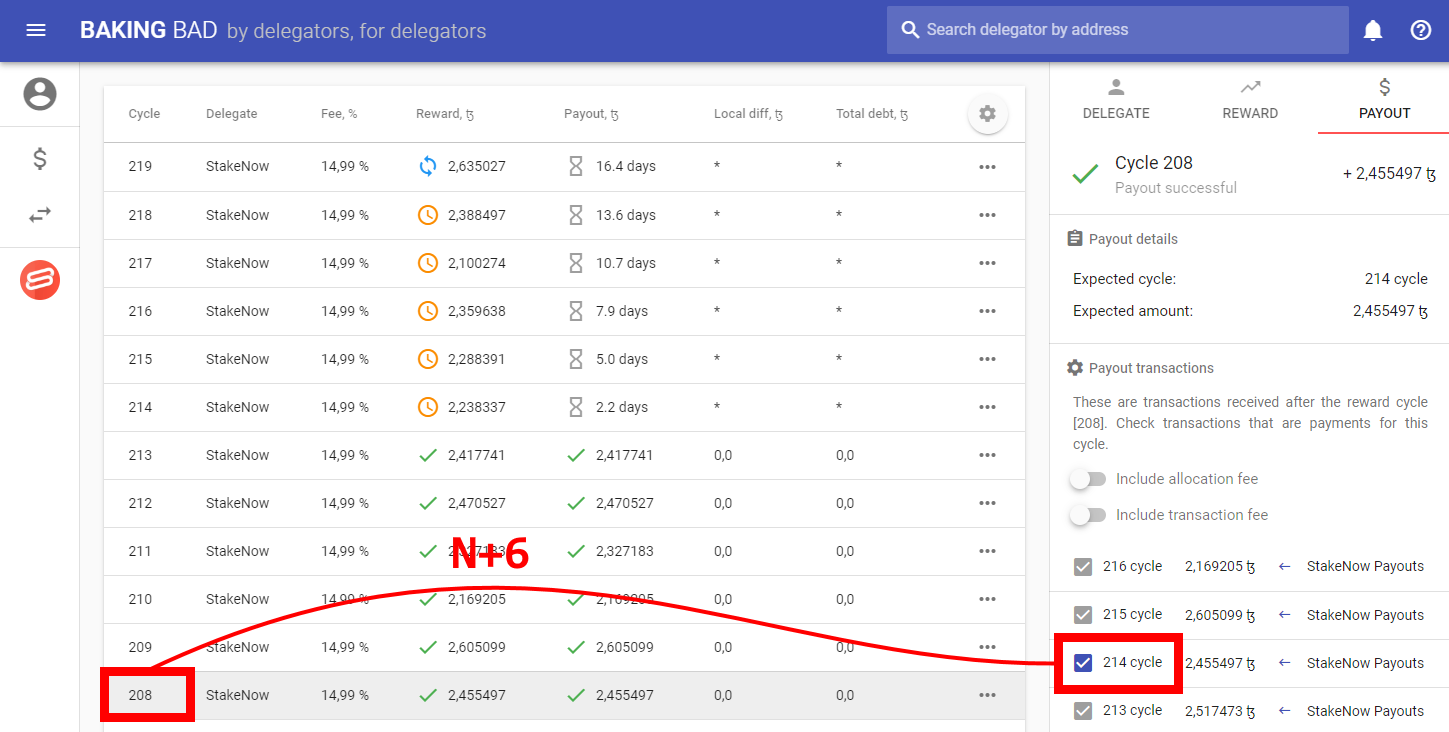 However, some Tezos bakers don’t wait until rewards are unfrozen and pay the same amounts to delegators in advance from their own funds, so there is no payout delay anymore. In other words, rewards for cycle N comes in the cycle N + 1 (after ~3 days).

Such a payment schedule is more preferable for delegators because they receive the first payment earlier, but less preferred for a baker, because he must pay in advance from his own funds.

So, when will you start receiving staking rewards after delegating?

This totally depends on the payment schedule (payout delay) of your Tezos baker or delegation service:

It is worth noting that Tezos bakers and delegation services can change the payout schedule or have different conditions for different clients. Use the Baking Bad dashboard to track your staking rewards and payouts.

What happens if you add or withdraw funds?

Every time the balance of a delegated account is changed (e.g. you raise additional funds, or withdraw funds, or even receive reward payments) you have to wait the same time as described above (37 or 23 days) until these changes are applied.

As you can see, Tezos staking or delegation is very simple and absolutely safe. If you hold any amount of Tezos coins (XTZ) you have no reason not to delegate it, because it won’t be locked, and you will earn Tezos staking rewards. The only thing you need is to be patient and wait ~37 or ~23 days before receiving your first reward payment.